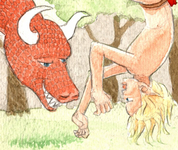 Broceliande is a WEB comics composed by single page stories made with watercolours.

The dragon and his elf

Is is a Non verbal webcomic. It has been drawn with pencil in A5 sketchpads mainly during travel time in train and metro. Three warriors conduct a young elf through Broceliand forest. They are attacked by Trolls who are easily controlled. But this move is only a distraction. A pterodactylus appears above the tree and steals the boy...

Non verbal webcomic. Two boys work in a gold mine to move mud. In these hard live condition, their strong friendship is their only chance to survive... I submit to you this new story without text titled "Work Camps, C5348". I've drawn it with a lot of excitements. It will be a success if you can get only a part of these feelings. This story began like The Elf's Apprentice: one drawing gives idee for the next one. These pictures were drawn on A5 (14.8x21cm) 150g/m2 paper with pencil.

Non verbal webcomic. A young elf follows his teacher through the Broceliande forest. While they cross a village, the boy meets a girl. But some residents do not approve strangers in their community... The Elf's Apprentice is a non verbal story that I began in January 2005, a little bit by mistake. In April 2005, it contained 43 pencil drawings. During two years nothing happened. Between February en January 2007, I made 30 new drawings that end the first chapter of this story.